A tale of two beer mats 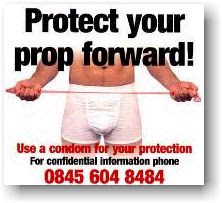 A pub landlord has banned beer mats showing a man in underpants stretching a condom as part of a health campaign. The bilingual beer mats and posters have been distributed to pubs and clubs across North Wales by the Health Promotion Division of the National Assembly for Wales. They show a slogan saying: "Protect your prop forward! Use a condom for your protection" and list a number of sexual diseases. "Prop forward" is a rugby term.

Kevin McArdle, the licensee of the Ye Olde Mail Coach in Conway, said: "They're just OTT (over the top). If they took the picture off and had only the words, that would be better." McArdle, a churchgoing Catholic and seven children aged between eight and 19, said "My job is to run a pub. I've put up with having to sell condoms with stupid flavors but I just feel strongly that this is so over the top."

An entirely different beer mat which detects the two most common date-rape drugs by having a few drops of spiked drink spilt on it could be in pubs "within three weeks," according to the company that developed it. The mat is an almost immediate test for the presence of GHB and a class of drugs which includes Rohypnol and Temazepam. Both classes of substance, when combined with alcohol, leave victims open to any suggestion, and induce amnesia that can be long-term or permanent. Made by a firm called Surescreen Diagnostics, the mat has four small, white or yellow windows on it which change colour if a drop of spiked drink falls on the sensitive areas. The mats cost about 60p to produce and the company aims to discuss their use with Scottish and Newcastle Breweries soon.