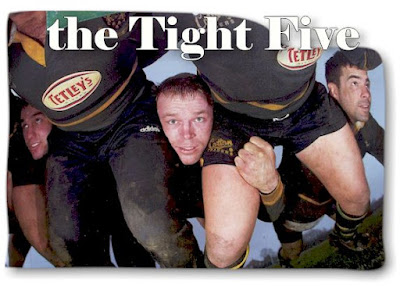 Why a section dedicated to the Tight Five? Two reasons: 1) My belief is that if the heart and soul of rugby is in forward play (and I think it is), then the heart and soul of forward play is with the scrum and the props, hooker and locks - called "the Tight Five", and 2) I play second row and sometimes prop. So - we'll let the loose forwards and backs have their exposure, celebrity, glamour and flash. This section is for the unsung workhorses of rugby.

Play "Spot the Prop" - A thing I did up for my club's website.

Attention American Hookers! - (A retrospective study of cervical spine injuries in American Rugby, 1970 to 1994.) If you're an American hooker finding yourself getting hurt in scrums, well, you're not alone.

The Unhappy Hooker - Clever title, interesting piece. Add to the difficulties of the position the fact that, in the U.S., hookers are injured more than any other players.


A Prop's Testimony to a Back - You backs want the truth? You're not ready for the truth. 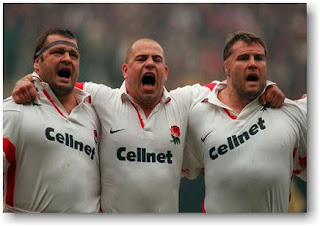 Playing Prop: A Prop's Guide - By Ian Diddams. I liked this piece so much I put it here as well as in Didds' own section. (PropTalk's John "Montana" Thomas calls Didds "...the Mark Twain of the Front Row," and so he is.)

Ancient Locks - The game of rugby is older than you think.

Jonah Lomu needs a bodyguard? - ...and this bodyguard is a prop? There's something about this that doesn't make sense to me.

A rugby lock - Not what you think. (My daughter once asked me, "What position do you play again? 'Key?'")

Fran Cotton - This muddy fellow played prop for the England side, and was quite a good one. He cleaned himself up, started a jersey business, and now sits on the board of the English RFU. Not bad for a guy named "Francis."

Coaching: We have the technology! - A self-described rant about coaching props.

Rugby Rampage - A odd little tale from the Christian Science Monitor about some front-rowers on the prowl and a hapless (or perhaps not so hapless) Christian. 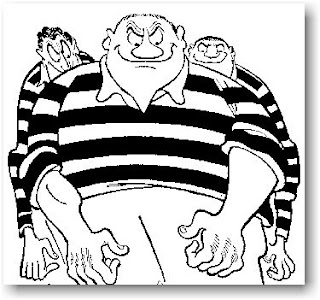 The Mystery Prop - Where is he?

You can't keep a good hooker down - The flesh-eating bacteria, yet another hazard of play!

Bugger Rugger - Maybe he'd like the game better if he played some position other than second row...

Life is More Fun in the Tight Five - The japes! The larks!

When a Try's Scored by a Prop - It is known to happen every now and then.

Roboprops - But can they drink?

Scrum sleds - Sometimes being in a wealthy rugby club isn't always an advantage...

"Football is 15" quotes - The one about locks is so true.

Tighthead Prop at the Races - Nice, to be eating your hot dog behind that. 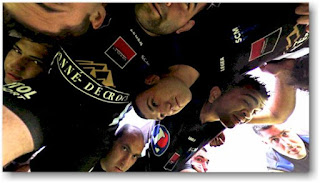 The Unpleasant Lineout - Well, it looks unpleasant for the jumper, anyway. (Who knows what the hoister is thinking?)

Panoramic view of a scrum. Something backs will never understand. This is Stade Toulouse from France. Note the prop walking away. Hey! You're supposed to be in the shot!

Hooker Wines - It's the drink the front row drinks! (Well, not really. I'm pretty sure that would be beer.)

How NOT to tackle a big prop. Looks like the prop in question is dressed for warm weather, too.

Ode to a Tighthead Prop.

Why Rugby Has Backs Explained At Last

"The locks must be the grinders in the pack. They must clean out rucks and mauls, take line-out ball and kick-offs, and put in tackles. Not spend the day on the wing. A tight five can only be rated on how it does the basics. Not on how many tries they can score." - Former South Africa hardman Krynauw Otto tells his successors in the Springbok second row to cut down on the flashy stuff and get back to basics when they face Argentina. (June 2002)

"Lock forwards seem doomed to toil in obscurity. Many years ago, in the seasons when one lock held the 2-3-2 scrum together, Leo Fanning, a wise and witty Rugby writer, said that the mission of the forward was to be always to the fore in the field and to enjoy a back seat in the newspapers. He also said that the lock forward was frequently, with good warrant, the most profane man in a team." - Gordon Slatter, Football is 15

Playing in the second row doesn't require a lot of intelligence, really. You have to be bloody crazy to play there for a start." - Bill Beaumont 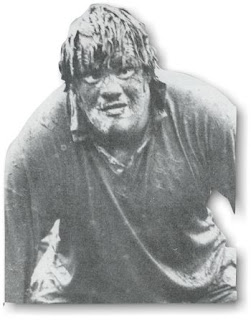