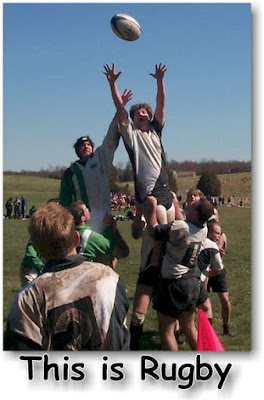 (as played by the Western Suburbs RFC, anyway...)

Rugby is called "the world's greatest team sport" by its fans. It's called insanity by others. But there is something about it that endears itself to the player and spectator. Despite broken limbs, damaged muscles, torn tendons and bloody noses, it inspires a passion for the sport well into the age when the players of other games hang up their gear and seek after a soft couch and slippers.

Perhaps this little photo essay will help you to understand why this is. 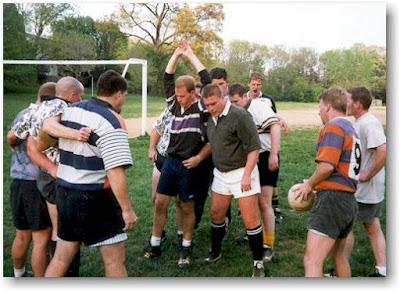 It all begins at practice, where plays are developed, teamwork is created and friendships are formed. 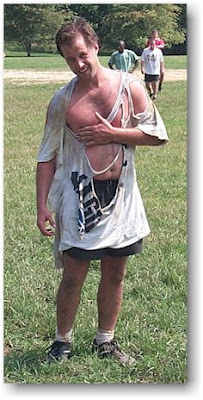 One thing about rugby: it's rough on clothing, even in practice. This is why rugby jerseys are tough and sought after as casual wear. 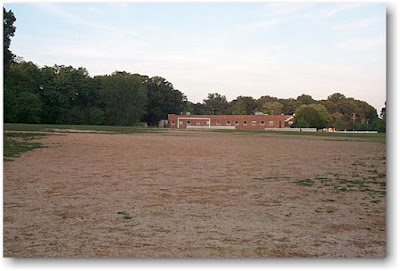 Rugby players love lush, green fields of grass (which we call a "pitch"), where we can run, tackle and be tackled. The reality in the United States, however, is often something different, so we make do with what we have. 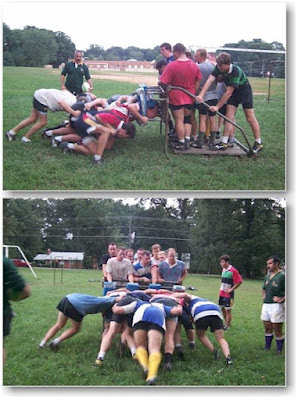 This is our old friend the scrum sled. One forward pack lines up in scrum formation and butts into it while the other pack stands on the back for weight. The sled is driven around for awhile, then the two packs switch. Repeat, repeat, repeat. Sometimes, if you've worked hard enough, you can see stars when you unbind from the last drive. Those allergic to physical exertion are advised to take up something more gentle. 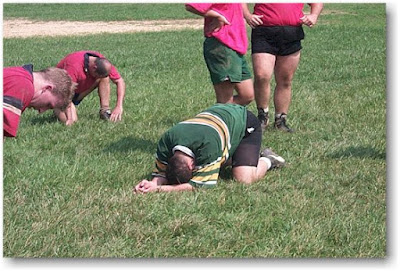 There's a variation of the standard fifteen-man rugby game called "sevens," normally played in summer. It's seven players playing two seven minute halves. Just reading this, it doesn't sound like much, but at the end of fourteen minutes most players are exhausted. These fellows are actually quite fit, and are good runners. Remember: running will add years of life to your heart. 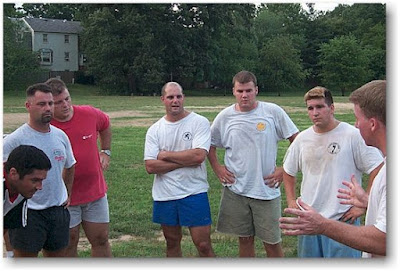 At the end of practice there's usually a talk about what needs to be done next, or an encouragement of some sort. The captain usually also thanks players for showing up. This time it's an exhortation to do some jogging on the evenings between practice nights, to maintain or improve fitness. 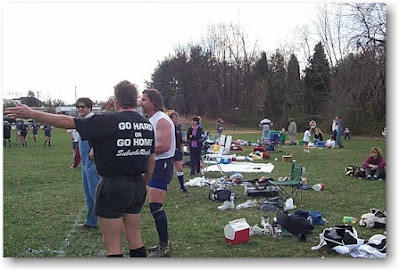 If you've a mind to watch rather than play, this gives you an idea of what kind of crowds you can expect at most rugby matches: little to none. You can put your chairs and igloos more or less along the out-of-bounds lines of the field, and hear every impact, referee call and profanity. Rugby is one of the best kept secrets in American sport! 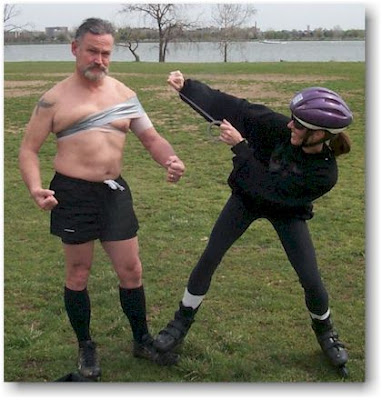 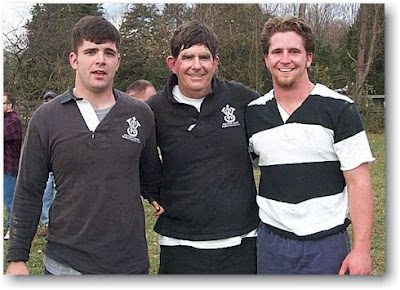 This might not be immediately obvious, but it's true: rugby is a game for every age. The fellow at the top, being duct-taped up by his wife in preparation for a match, is fifty. I have played on a pitch with a man over 60. Players age 35 and over can play in "Old Boys" teams where, most of the time, good humor and maturity prevails over the competitive spirit. 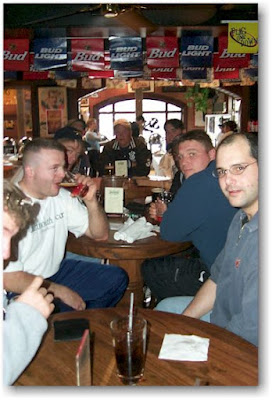 Every rugby club has its watering hole, and Western Suburbs is no exception. After practice we go to ours. 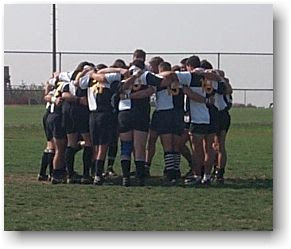 It's Saturday. The time for practice is over now - time to play. There's a degree of nervousness at the beginning of a rugby match, even among veterans. The captain usually calls for a motivational circle-up before kick-off. Win or lose, there's eighty minutes of run, crunch and maul ahead. And you'll have to rely on your fellow players to prevail. 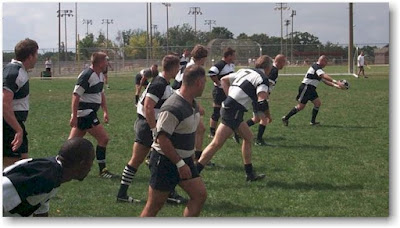 Play begins with a kickoff, just like in football. 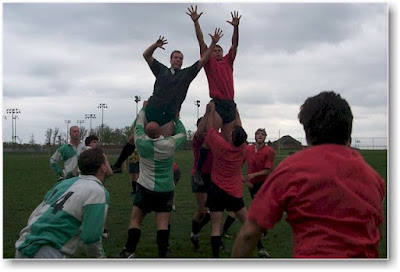 When the ball has gotten out of the playing field boundaries, the forwards get it back into play in a set piece called a lineout. The hooker throws the ball to a tall teammate, who is hoisted in the air by his shorts by the strongest players. The opposition players are lined up alongside, and the jumpers fight to catch the ball. This being rugby, much jersey-pulling and shoving also takes place. It is said that the lineout is where arguments are settled.

Yes, there's a lot of running in rugby! 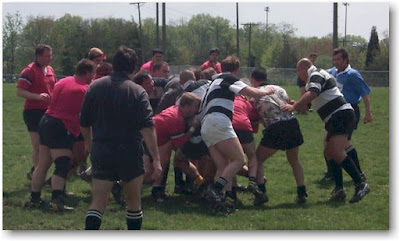 A maul is formed when a player is holding the ball but cannot run due to the fact that opposition players are holding him. His teammates attempt to free the ball and shove the whole formation down the field towards the opposition try line. These are very sweaty, loud affairs. 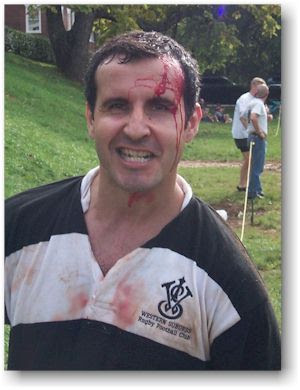 "Give blood - play rugby." There is sometimes a cut or a bloody nose as a result of play, but oftentimes players are insistent upon being bandaged up and allowed to return to the game. It builds character. This fellow played on after being bandaged up. 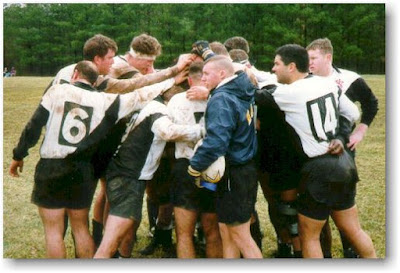 It's the end of half time and the beginning of another 40 minutes of play. Another occasion for a motivational circle-up.

"At the count of three: One, two, three, SUBURBS!" 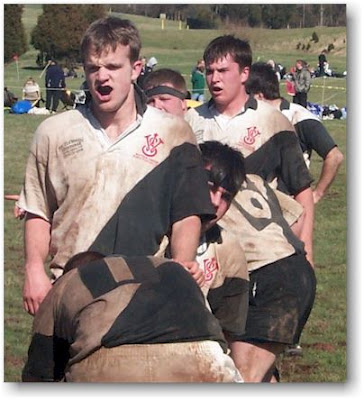 They're not missing teeth. They're wearing mouthguards. And, by the way, rugby forwards wrap their ears with black electrical tape to prevent them from getting cauliflowered in the scrum. 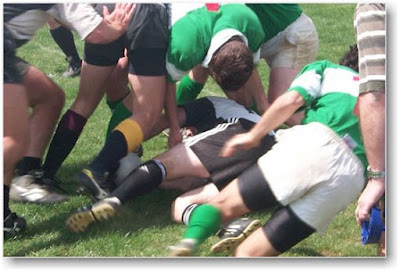 This is what a lot of rugby action is like: a lot of butts and hands, everyone shoving. Then you move onto another part of the field and repeat the process.

A ruck is formed when the player with the ball is tackled and places the ball on the ground. His teammates then try to shove the opposing team out of the way to recover the ball to put it back into play, thereby retaining possession. Unlike football, rugby is a game of possession, not yardage. Easier said than done, and somewhat chaotic. 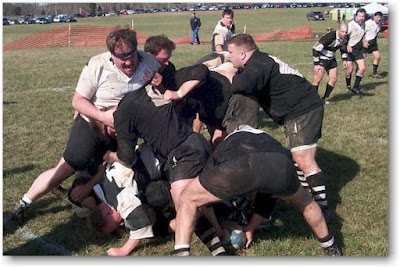 Some rucks are titanic! Note the other players waiting for the ball to be put back into play. Unlike football, a halt does not occur when the ball is on the ground. This gives rugby a flowing nature of play. 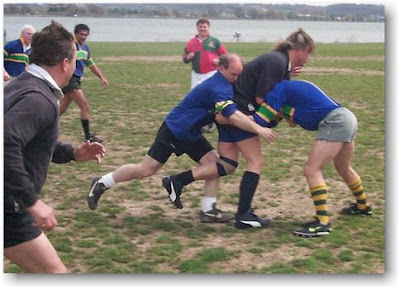 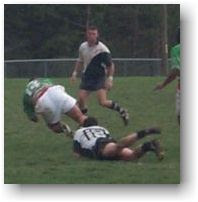 In rugby, even the old boys must tackle, but sometimes it helps if a teammate can assist. The picture on the bottom indicates that just getting a hold of an ankle will do. 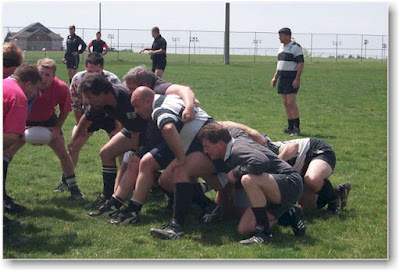 Perhaps rugby's most characteristic feature is the set piece known as the scrum, which is unique in sports. The ref calls for one of these when the ball must be put back into play after minor penalties. Here, the forward pack is setting up to engage the opposition's pack. The ball will be thrown into the formation by a player known as a scrum half; the front row players will attempt to kick it backwards so that it can be used by their teammates. 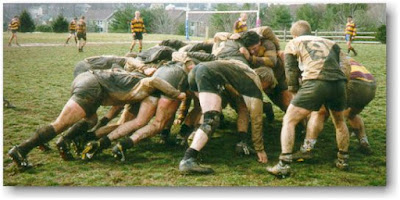 Getting sixteen (two eight man packs) of the biggest and strongest guys of both teams to push and shove against each other in a scrum is something that cannot be adequately described - it must be experienced! (Especially in the mud.) 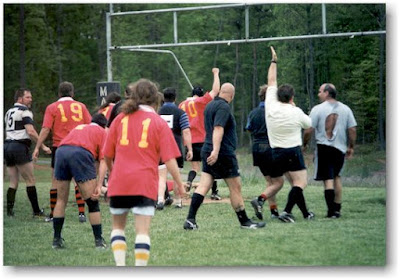 An important feature of a rugby match is the try, which is worth five points. The picture at top illustrates the old saying, "The whole point of rugby is fourteen men letting one man get an extra yard ahead." That man (he's the one in black and white whom everyone else is following) runs to the opposition's try zone and touches the ball down to the ground. It is not sufficient for him to simply carry it in; the ball must be touched to the ground. The second image is typical: players raise their arms in triumph; the ref does it to signal that the try is awarded. 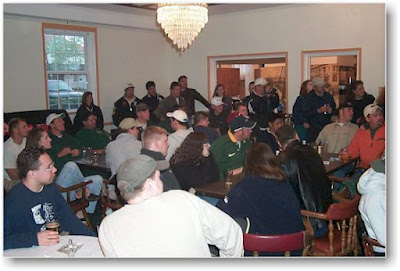 There's always a party after a rugby match, when all is forgiven and most is forgotten. Both teams meet over a glass of beer at the host club's local watering hole. This is the traditional "third half" of rugby. 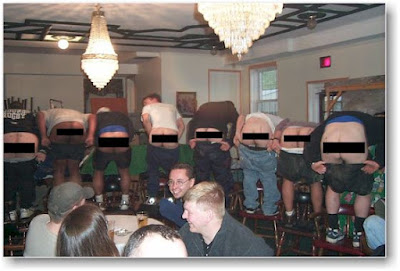 Yes, everyone knows about rugby parties, where the entertainment can only be described as "collegiate." Boys will be boys. 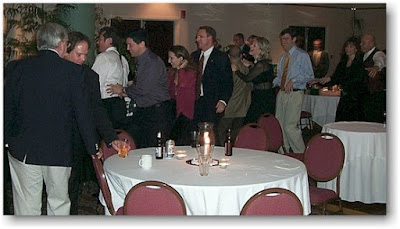 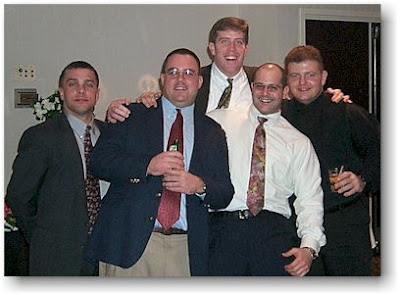 Rugby isn't all mud, blood and beer. It's also suits, ties and beer. We have an annual banquet during the winter where we recognize the best and worst and hand out gag prizes. It's all in fun and everyone has a blast.

The traditional team shot, as old as sports photography. This one took place after an especially wet practice. Perhaps you can see it from this, but rugby players enjoy a sense of camaraderie found only when sacrifice, teamwork and great physical effort is required. The bonds of friendship formed can last a lifetime.