Lands' End and the Promotion of Rugby

Lands' End and the Promotion of Rugby


My first real exposure to rugby was the result of reading a Lands' End catalog a year or two ago. For those of you who aren't aware of the company, it's a Wisconsin-based clothing and linens distributor, marketing entirely through catalogs. I first started buying clothes from them back in the early eighties, and have since bought the great majority of my dress and casual clothing from this source. Being tall and having somewhat special requirements (I like my ties to extend to my belly button, for instance, so I don't wear what my wife's friend jeeringly calls a "sternum tie"), I appreciate the fact that Lands' End shirts, pants and ties are cut rather larger than clothes found in department stores. (My wife, who knows a lot about clothing, tells me that higher quality clothing is normally cut somewhat more generously than cheaper items. I have found this to be true whenever I have tried on an "XL" shirt made in Taiwan.) Their catalog is attractively printed with special feature stories of some kind in nearly every issue, their clothes are of a uniform high quality, and everything they sell carries a nice "Guaranteed. Period." guarantee which I have seldom had to take advantage of. So I can highly recommend Lands' End.

Anyway, lest you think I'm a Lands' End publicist or something, back to rugby. My first real exposure to the game was by a feature article in one of their catalogs, describing the national team, their line of rugby shirts and how they manufacture the jerseys used by the U.S. national team, the Eagles, to high quality standards. Lands' End has the exclusive contract to supply the Eagles with jerseys, luggage and other clothing, and I think this is probably a good thing for U.S. Rugby, despite the fact that Lands' End is the only place you can buy an Eagles jersey. (Resulting in some grousing from other retailers.) The firm does a good business in the States and has a good reputation, not to mention wide (I think even worldwide) exposure through their catalogs. The awareness they create for rugby - which is sadly not one of the U.S.'s favorite games - is obvious. 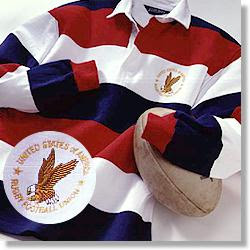 You can buy the very same jerseys the Eagles wear from the catalog, but unlike their other rugby shirts, you can't get them in the taller cut that provides more length in the arms and more tail to tuck into pants. Why this should be, I do not know; this also mystifies my wife. Locks, as we know, tend to be tall. (Eagle lock Luke Gross is 6' 7"!) The Lands' End rugby shirts are of a very high quality and are comfortable to wear. Before I joined Western Suburbs I bought one in the University of Virginia's colors, navy and orange, and was quickly admonished by a teammate to not wear it when we played UVA. (Not to worry, our a-side and b-side beat them handily last season.)

What was interesting to me about the coverage Lands' End gave to The Game were some inaccuracies, which I have also seen repeated in other rugby literature and publicity. Here's the copy that accompanies the picture of their jersey: "Wear it and you'll never want for durability. This is the actual jersey the USA Eagles wear, with 18 years of blood, sweat and tears built into it. (Just think how rough you can get with it!) But probably not more so than the players who wear it. Real rugby has no helmets. No pads. No time-outs. No substitutions. Just 2 brutal 40-minute halves of all-out action."

Let's examine this for a minute.

"Real rugby has no helmets." All-Blacks flanker Josh Kronfeld, citing double vision as a result of his explosive tackling, mauling and rucking style, habitually and sensibly wears a soft scrum cap. True, this isn't really a "helmet," which would be composed of a hard material. But I wouldn't want to imply Josh isn't playing "real rugby." (Certainly not to his face.)

"No pads." Admittedly, padding really hasn't caught on to U.S. club-level play, but, what are those big shoulders on All-Blacks and Springboks these days? Looks like padding to me. Either that or those guys are doing credible impressions of Joan Crawford. (When the new padding allowances were discussed at an Old Boys meeting I attended, there were somber declarations that this was A Bad Thing and, if allowed to follow the logical path to U.S. football-style protection, would forever destroy rugby as we know and love it. I'm inclined to agree.)

"No time outs." What, do they think players continue when concussed or something? That passes are made and caught with broken wrists? That play continues over the spinal cord-damaged bodies of front rowsmen lying helpless on the pitch? That players continue with the same wide-eyed and gory faces so common in photos (but not televised bouts) in wrestling magazines? Somebody needs to acquaint Lands' End with the concept of "injury time."

"No substitutions." This may have been the case a few years ago, but I've been watching substitutions in televised international test rugby matches for the past year and have seen (and taken part in) club-level substitutions as well. And in Old Boy play, substitutions are not only common but expected!

"Just 2 brutal 40-minute halves of all-out action." Yes, if you're playing what's called a "regulation match." My club's b-side, of which I am a proud part, plays 30- or 35- minute halves. (I confess I don't understand the 35 minute half. If we're going to add time to halves why not just play 40 minutes, so we can pretend we're a-siders or even All-Blacks, if we want?) My Old Boys side customarily plays three 20 minute periods - but, of course, the Lands' End copywriter probably doesn't consider this "real rugby." Hmf. Like to get him in a ruck with a bunch of heavy old dudes...

Finally, there's: "Please note: this jersey has a snug fit -- because loose fabric can give an opponent something to grab on to. (Hey, it's an authentic rugby shirt after all.)" I own two Lands' End rugby jerseys. After repeated washings they fit bigger and looser than the Maxmores I usually get for play and practice. Why? They're pre-shrunk, unlike the Maxmores!

I bought a truly odd Lands' End jersey at a sale at my local supplier's a few weekends ago. I only paid $10 for it, an outstanding deal. It has three black and white stripes down the arms like an Adidas ("All Day I Dream About Scrums") jacket, and the characteristic Maxmore oval stitching at the base of the collar - suggesting that Maxmore made it for Lands' End. The funny thing is, my two daughters want the jersey. My youngest, in equipping herself for the neighborhood rollerblade-dance team, has taken to running a strip of masking tape down her arms and marking it with an indelible black felt pen to emulate the Adidas design. This is the first time in my entire life I have ever bought an article of clothing that a female has found desirable!
at June 13, 2017