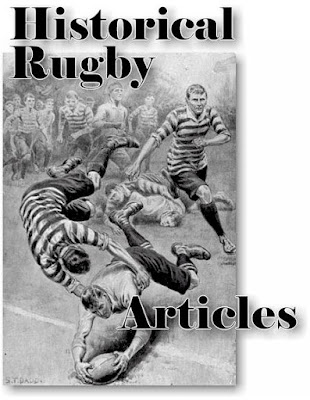 Rugby and Rugby School - Let's begin at the beginning. We'll start with encyclopedia definitions.
Refutations! - But wait! Perhaps the encyclopedia isn't correct after all!
Entry for "football" from 1911 Encyclopedia Britannica - Note that William Webb Ellis isn't even mentioned in this.
A rugby pitch - Complete with lines and everything.
More About That William Webb Ellis Story
An unhistorical survey of rugby - by A.A. Thomson, from a time long past.
What if William Webb Ellis was tackled? - A what-if? by Alison Brooks.
Welcome to Rugby, Tennessee - Founded by a famous early English rugby player
Welcome to Rugby, North Dakota - I kept seeing e-Bay items (postcards, old photographs, plates, etc.) about Rugby, North Dakota, and wondered why this place was considered notable. (I've never heard of it.) Then I stumbled across this photo; now I know.
Play up! Play up! And play the game! - A stirring little bit of the British Empire as it was, and another comparison between a game and war.
On the Ball - Another neat little vestige of British Imperialism and sentiment...
Five Nations Rugby (Winners since 1882) - More of a list than an article, really, but fun to know.
The Rugby Ball - It wasn't always made out of synthetic materials and marked "Gilbert," you know.
American Football - A short history of how American football came to be. Mentions rugby, of course.
rugbyfootballhistory.com's Rugby in the Olympic Games page - A good site!
Rugby at the 1924 Olympics - Another account.
An American Victory in Paris - And another!
French postcard from the 1924 Olympics rugby match
the Calcutta Cup - A famous old rugby trophy.
Football at Rugby - From an 1870 print. Looks like that little girl's life and limb is being endangered. Note the round ball.
The Rugby Boys at Football (c. 1885) - Note round ball and schoolboy skull and crossbones insignia.
A Life Less Ordinary - Playing rugby in the shadows of the pyramids.
The Rivals - A Welsh brawl.
From Rugby Heaven to Battlefield Hell - A brief look at the generation that perished in World War I.
Actresses Against Models - An epic struggle.
Haka: The Legend Of The All Blacks (a TV program review) - Has some interesting information about the how the new-style haka came to be.
An Airman's Letter to his Mother
WWI British athletes poster
Silver fern evolution - Personally, I like the 1905 or 1930 version best.
B.C. football cartoon
2003 Rugby World Cup Draw
Country by Country List of the Names of the Rugby Player Positions
Rugby marker
The History of the Webb Ellis Cup
A Song for Jonny
Kenneth Roberts on Rugby
The rugby "cap" - Since I can't have you be ignorant of basic rugby terminology...
Rugby-Pioneers.com - An excellent website from Frederic Humbert of Paris, which shows the game and the players as they were a long time ago. Great stuff!
The Missing Link Between Gridiron and Rugby
Field of Broken Dreams - South African rugby
The Power Play - More South African rugby
1905 All-Blacks jersey
1888 Welsh Medal - Apparently the oldest in Welsh rugby
1924 Olympics rugby match footage
England's Tsar Forward
The 1886 Rugby Union Laws
"English and American Rugby" by John Corbin, 1901
Sunset Magazine 1906/1907 (look for rugby in table of contents)
at June 07, 2017