By Wes Clark (and various artists)


You've got to admire the creative spirit. It will assert itself despite a lack of knowledge of the subject matter, no formal training, a poor eye for composition or missing mastery of the rudiments of technique.

When I pretty much gave up Civil War reenacting to play rugby, I had hoped I'd leave bad hobbyist art behind. (Click here for my examination of some pretty poor American Civil War-themed "Limited Edition Historical Art Prints.") But no, it appears I haven't. Let's look at a few. 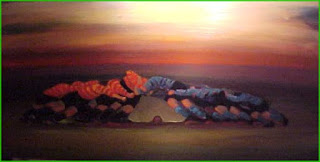 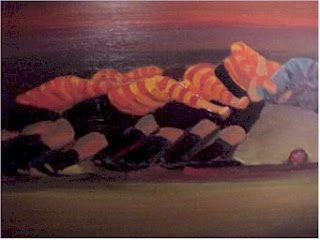 "Last Scrum of the Day" by Rod Smith (detail at bottom).

I'd imagine it's getting pretty hard to see the ball, not to mention the other players. (Where's the scrumhalf? These guys are pushing to no avail if nobody is going to put in the ball.) Probably lots of knock-ons, meaning lots of scrums. The Tight Five is pooping out - which might explain that strange sideways binding technique depicted here. And is that a white canvas tent they're packing down over, or did the ball wind up at the end of a white Wham-O Slip n' Slide? 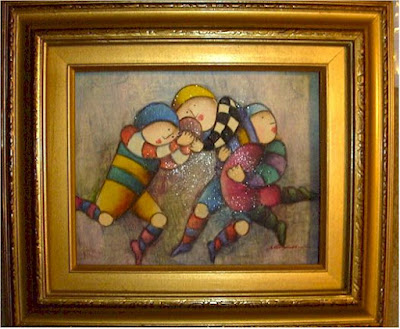 Are these men, women or circus clowns? Are those actually yellow and powder blue scrum caps? Why are they on their tip-toes? And how can you tell what team the player is on if the jerseys are all different colors? Is this even rugby? (The ball looks circular, yet there's some tackling going on.) And what's with the overly-ornate frame? 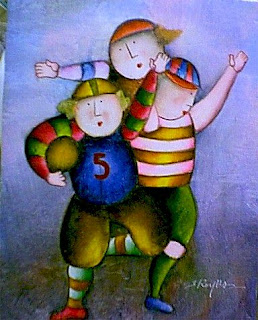 Another work by Roybal

Either the match is over and this depicts some sort of celebration, or these fat, flat-chested women with Bozo hair-do's are running down the field with their arms up to some purpose. Note that the lock forward with the brown knickers is wearing her jersey backwards. 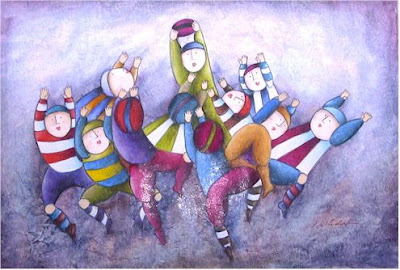 What in the hell is going on here? It's advertised as being rugby, but this looks like rugby as imagined by a prop who just had his frontal lobe punctured by an aluminum stud.
at June 13, 2017