This is an article that appeared in my local paper about my rugby club and rugby in general. We were at practice when the reporter showed up. - Wes

They're not CRUSHERS ...they just play a lot

For a game with a growing American audience, rugby still seems as British as afternoon tea and crumpets. That's not surprising, of course, since rugby was begun in England in the early 19th century by William Webb Ellis. And the game swiftly became a popular sport for British schoolboys and subsequently has commanded a following throughout the British Isles and in most places where the British took up residence. It has great popular appeal in other nations as well: about 70 Countries have an international rugby team, and the USA team is the defending Olympic champion. 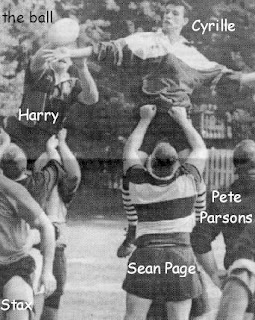 In the United States, however, this rugged game has a long way to go to capture the mainstream of American fancy. Just take a look at your library shelves. You may find three or four books on rugby, but dozens that cover the game of football. Ironically, however, rugby is the forerunner of football as we know it, and several rugby terms, such as touchdown, show up as football lingo.

Just why rugby has not gone mainstream yet, says rugby player Pat Herrity of Clifton and a member of the Western Suburbs Rugby Football Club, may be because rugby has gotten a bad reputation "as being a drinking and partying sport, which it partially deserves," he notes.

The basics of the sport are the same as those of American football: with some variations, players tackle, run, pass, and make touchdowns through goal posts. The field is slightly larger, and the ball slightly fatter.

But a big difference between rugby and football is protective gear. Rugby players don't wear padding or helmets. While that may have contributed to the sports reputation for being rough, Herrity and other players believe that particular rap is undeserved.

"You come out of the game with lots of bruises and sore muscles," Herrity says, "but with no serious injuries as in football. This is not a game of inches, but a game of possession [of the ball]." Without protective gear, players tackle and play more carefully - if you're not wearing a helmet, you're not going to stick your head into someone else's stomach, Herrity explains. "The padding causes the injuries as much as preventing them," he says. "We are not armed warriors; we are human beings."

Rugby can be rough, admits Jeff Harpold of Rosslyn, treasurer and coach of the Western Suburbs team, but then, so can football and baseball. "The chance of getting hurt is always there," he says, "but there are enough safeguards about dangerous play and of people taking cheap shots."

Simon Harrington of Alexandria notes that he has been playing all his life without an injury greater than a twisted ankle. But he admits that rugby is rougher in America, where players are often converted football players and, as he describes them, "huge." Most haven't had lifelong exposure to the game - Harrington has played since he was a young boy in England. "The British teams we have hosted, we play a rougher version than they do, rougher here than elsewhere," he says. There's a "football mentality" to his club's play. But, adds Harrington, people are out to enjoy themselves, not to hurt someone else.

Unlike many other team sports where players sometimes stand on the field idly, rugby is a fast-moving game with few pauses, and every one of a team's 15 players are on the field. "In rugby, all 15 guys have the opportunity to run, pass and tackle, and they are on the field doing all things," says Harpold. "You get more involved in the play ... you have more of a stake."

Players say they love the game as much for the instant camaraderie as for the physical exertion. This, says Harpold, is one reason he loves rugby so much. "You can go anywhere in the states or in the world and wear a team jersey, and people ask you about rugby," he says. "It's amazing. A couple of guys have been in European airports wearing their team jackets. People greet them."

Recalls Herrity, "When I was in Ireland, I walked up to an Irish captain and had an immediate bond. We talked rugby. You don't have that with a lot of other sports."

Not just for men

While rugby may not be a senior citizen's sport, it is not at all gender-based. The game appeals to women for the same reasons: camaraderie and exercise.

Take the case of Jane Bolin of McLean, a member of the Northern Virginia Women's Rugby Club, a decade-old group of about 30 players. Picking up rugby in college almost as a freshman afterthought, Bolin has become a rugby addict who loves the game for the camaraderie - it's like a sorority, she says - and the physical workout. "The game is 80 minutes long," she explains. It is intense, a great way to release stress. It's an adrenaline rush, and I love it." She emphasized that women's rugby, played just like the men's game, is not a rough sport for women, so long as team members play a clean game.

Rugby's growing popularity comes in part from more exposure in the media and from its appeal to younger Americans, many of whom start playing in junior high. Its enhanced image is all to the good, says coach Dave Lyster of Fairfax. "There's not a very big forum for publicizing the sport, and it has a somewhat negative stigma from people who don't know the game," he says. "If there's anything I'd like to do it's to put it in a better light with the general public."

Fortunately, Northern Virginians have ample opportunity to learn more about rugby., both by watching and playing the game. For newcomers to rugby, club president Kevin Corry of Fairfax suggests watching it on cable TV, viewing videotapes and reading. Then go to a practice. Visitors are welcome at the Saturday games, usually in Braddock Park in Centreville, and potential players are urged to come out to practice.