From the 29 January 2000 issue of Rugby Magazine (the one with Jack Clark on the cover, see end of this page). Article by Buzz McClain. - Wes 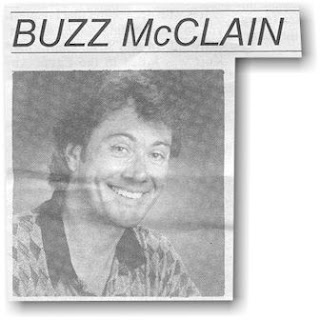 This game we play is filled with lively personalities, most of them of the non-conformist variety, and that explains why many of us are attracted to the sport. Who wants to hang around people who are like everybody else when there's a whole world of energetic, dynamic and creative people with an avid interest in the sport of rugby?

Well, here's another one of those people. His name is Wes Clark and he's 43 years old. He started playing the game at... 42.

And in that year he's been a rugger, Clark has made a significant contribution to rugby, not just for his club, not just for U.S. rugby, but for rugby worldwide. He's even won an international rugby contest and been mentioned in Sports Illustrated.

None of it was luck, and all of it was out of his newfound devotion to his favorite pastime. First, a little history.

Despite the fact that he's a fit 6 feet 4 and 250 pounds, Clark never played sports growing up in Southern California. Didn't like them. "The only sports I played were the ones we had to in P.E. class," he says. Instead he was the No. 2 chess master at Burbank High School.

But all that changed in March of 1998 when he was channel surfing one night and came across Championship Rugby's broadcast of the Wales vs. Ireland Five Nations match. "I didn't think anything of it at first," he says. "I thought, 'Oh this must be rugby, I've heard of that before' and turned it off after about 20 minutes. But I remember waking up the next day wondering if those rugby matches were on again. So then I tuned in the following week and watched the entire match."

Clark is a computer engineer for the U.S. Patent and Trademark Office near Washington, DC and, as such, is Internet-oriented. It was only logical that he would seek out more information about rugby on the Web.

"I started reading about it, started researching some of the clubs in our area and contacted Art Steffen," says Clark. Steffen has been a driving force behind the Western Suburbs RFC in Northern Virginia since the team was founded in the late 1970s. "He suggested I go out and watch practice, which I did in late May. I watched the practice session, thought this is nuts. I'm too old for this crap; I've never done anything like this in my life. Then I watched a game (live) and said to myself, 'No I definitely do not want to do that."'

But still... there was something about it. "I gave myself the summer to think it over," he confesses. It was at a Suburbs Old Boys meeting that he met others of his age and ilk that inspired him to give it a try. "I started practice in the Fall of '98," he says.

Locked up at Lock

Now he plays second row - at his size, what else is he going to play, scrumhalf? - for WSRFC's B-side and the A-side when compelled, and for the SOBS. He does a fine job, providing consistent support in scrummages and in the open field; it is impossible to tell he has not been playing much longer. Although he's highly sociable and clearly enjoys the camaraderie, he's not in it for the beer: Clark is a Mormon.

But it's off the field where Clark has made his mark. He already maintained several websites, including "Avocado Memories" (tales of growing up in Southern California, which he is actively pursuing as a book), "Wes Clark's This and That" (family stuff), "JonahWorld!" (reflecting his 13-year passion for Civil War reenactment, which seems to have been usurped by rugby) and "The Utah Baby Namer" (nutty names from Utah, a site that has reached some 200,000 hits).

When WSRFC's secretary stepped down, Clark stepped up and took over communications for the club, including handling the website and e-mail distribution list. The site, with the commercially appealing URL of "rugbyfootball.com," is an infinitely valuable tool for communicating with players. Besides news, schedules, party photos, histories of the club and other links, there's a phone list, with home, work and e-mail address. Most of the members' names also have links to a photo and bios. Very impressive. Clark takes digital pictures of every game and event and puts them on the site, usually the same day of the event. He updates the site at least once a day. 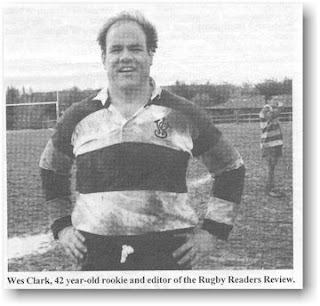 "It's not hard at all," says Clark, who is married to Cari and has children ages 16, 13 and 9. "Once you've learned a little html, and have the procedures down for downloading files, I can do an update in 5 or 10 minutes. Everybody likes it. I got an e-mail from a guy at NOVA (Northern Virginia RFC) saying they like it and will pattern theirs after ours. I get feedback from people in Australia, New Zealand, England and other rugby countries all the time."

But that wasn't enough for Clark. During his first winter without rugby in 1998, and before he took over the club's site, he developed yet another website, this one called the "Rugby Reader's Review." "It turned into a research project almost," he says.

The RRR site's mandate is to post things "you won't find on club websites. It's a multimedia site. There's a video of the haka, the Steinlager All Blacks beer poster. There's a lot of stuff people don't know exist on the Internet. "The emphasis is on literature," he says. "I'm trying to make stuff available on the Web you don't find anywhere else. For instance, an account of the way rugby used to be, anecdotal information, coverage about the filming of the movie "Alive," things like that."

Clark provides links to about a dozen other places, including one to Ian Diddams, "the world's only literate prop forward," and his hilarious Dickens' like accounts of the game. Rugby images, articles from around the world, songs, humor, a section on literature devoted to the tight five ("the heart and soul of rugby," Clark writes) as well as his own rugby journal are on the site. "If I find it and it looks interesting I put it on there," he says. (To link to all of Clark's sites, click here)

The Rugby Reader's Review was mentioned in the November 1st Sports Illustrated story about the recent Rugby World Cup. "One of sections was websites, and they listed five or six," Clark says. "The others were Jonah Lomu's homepage, the All Black's home page, Scrum.com, a few others and mine."

As for the international competition, it was an essay contest hosted by "William Webb Ellis" of England's Wakefield RFC, who wanted to know: "Who do you think was the REAL winner of the Rugby World Cup?"

Clark wrote an essay in the style of Gen. George Patton, touting America's hatred of losing and tradition of winning. In that light, the only winner of the tournament was Juan Grobler, the U.S. Eagle who scored the only try against World Champion Australia.

Clark won. "And not only did he send me a T-shirt, he sent me a book, something he found in a rummage sale, printed in 1957 called "Rugger My Pleasure," which is one cool book."

Naturally, Clark has reprinted a chapter on his website. 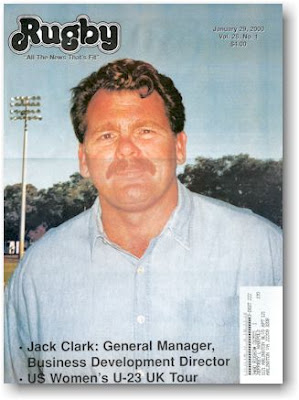