Have you ever gone to a public library database and typed in the word “rugby?” I do that from time to time – after all, this is the Rugby Reader’s Review – and sometimes interesting things pop up.

The last time I did this, I discovered a first-rate juvenile fiction work, “Falling Into Glory,” which I reviewed. This time, a book entitled “The Blue Lawn” came up, with the following summary. I must admit that the summary and Fakolt’s review raised an eyebrow.

Summary (from the library database)


Fifteen-year-old David, star of his school's rugby team, finds himself powerfully attracted to 16-year-old Theo, an outsider, who is not altogether likable, in this gripping and compelling novel of adolescent feelings and fears.

For Grades 9 and Up - A study of a powerfully charged friendship between two teenaged boys in rural New Zealand. From the moment 15-year-old David Mason sees Theo Meyer, an outsider who smokes, drinks, and drives fast, David is drawn to him. Theo is also attracted to clean-living David. A violent locker-room confrontation between the two betrays a mutual passion that neither one quite understands, or is willing to accept. David soon becomes a regular at Theo's house, where he meets the boy's grandmother, Gretel, a Holocaust survivor. As the seasons change, measured by Gretel's garden and her lawn of grape-hyacinths, David and Theo's relationship grows, and both teens are aware of its sexual energy. While David is so well adjusted to the possibility that he may be homosexual it strains believability, Theo struggles with the idea of being "queer." When Gretel discovers the teens together, she separates them and their friendship is suspended. Their relationship is symbolized by the blooming of the blue lawn, a testament to the beauty in being different. While David and Theo come across as multilayered individuals, other characterizations are less successful. David's parents are blithely supportive background figures and his sister is immediately accepting of his homosexuality. While there are too few positive examples of coming out, here it is too pat. The boys' intimacy goes remarkably unnoticed and unchallenged in their school and in the larger community. This absence of social conflict makes the thread of Holocaust history awkward rather than integrative. A thoughtful, if slightly flawed character study.

One thing I suppose I should mention right away is that there is no account of underage homosexual sex in this novel. Whether that’s a relief or a disappointment is for you to decide. The two main characters seem content to merely embrace one another while asleep. The problem with this, of course, is that ordinary teenage male hormones make this implausible – which presents a problem. If a young reader is looking to this book to help sort out confused sexual feelings, he may find it artsy, unreal and therefore unusable. However, if teenage homosexual sex is described in a book designed for juvenile readers the work is likely to become, well, let us say, controversial.

No worries here, however, as this is a very minor book in content, meaning and length. (I finished it in two sittings on the Metro going to and from work.) It also has another attribute likely to keep it from being defended or attacked – it’s boring. I refer to it as “the Blue Yawn.”

And it isn’t a book about rugby at all. It almost isn’t a book about teenage homosexuality, either. A lot of emphasis seems to be placed on gardening, and a rather unsuccessful metaphorical garden and blue lawn (which Fakolt sees as representing diversity). In an  awkward and puzzling plot development, a character reveals that she is a Holocaust survivor, which I suppose is meant to be symbolic of overcoming intolerance brought to the extreme. But there isn’t any real meaning attached to this character’s experiences. Indeed, as she is the person who separates the two young lovers she might be seen as intolerant herself! Did the author intend that?

Fakolt describes David’s character as too easily accepting of his possible homosexuality, and I agree. Nothing leads up to it or describes that this may be the case, and the character seems too easily accepting of it. In one conversation it just sort of jumps out from him almost fully-reasoned. I have teenaged children myself, and I assure you this isn’t how it happens. Another work about (heterosexual) male sexuality, the film The Summer of ’42, is more the norm.

What about David’s parents? They are mere backdrops, which is as annoying as those Shirley Temple films where Shirley’s always an orphan. Helpful, loving parents are seen as an encumbrance in a work of this type, which, again, I think would limit its usefulness to real teens.

Fakolt ends her review of this book by calling it flawed, and once again, I agree. I really can’t recommend this book to a rugby-playing readership – but then, that’s not the book’s target audience, is it? If you find yourself interested in a book about young rugby players, stick with “Falling Into Glory.” 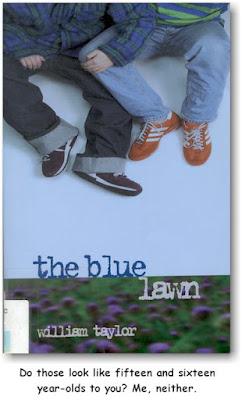